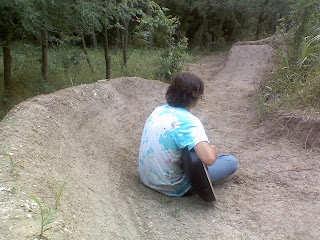 Friday I dug alone for at least 8 hours then saturday brian came out and we dug for at least 7 hours...what happend? What happend besides getting sick of my tapes? Well we built our first jump...and started building this hip/berm/landing thing. You can see the way the trail is going...its real windy, downhill berm jump hip berm landing...then its going under the tree that got struck by lightning...we've got to build a tunnel under the tree. im excited about it. After that some long ski jump thing, long and fast, I want to be flying at this point! 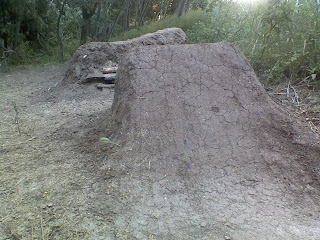 We're going to have to get some kind of tarps or covers for the stuff in the begginig because the sun hits it so much drying it out and making the work look like count draculas lips from 1950s black and white films...you catch my drift? cracked lips!!!!!!!!! GROSS. Does dracula have cracked lips? in my mind he does. yes. We havnt jumped the hip yet because we finished at 9pm...it was dark, and my bike is broken because I threw it like an idiot. Things have been a little too up in the air for me lately, thats why I dug so much friday. I needed it. I love it. 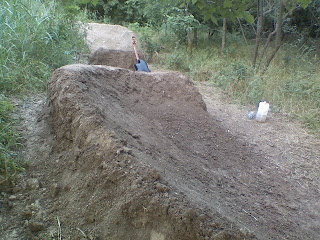 Note-brian is afraid of the dark. At deerland he was afraid a deer was going to kill him. Here he's afraid of pablo killing us? Im not so sure why but he does drive us, he is sweet, and he listens to hours of talk and blabble from me in the woods, he's also a great dude. Brian you are allowed to be afraid of the dark, but after digging for countless hours I kind of just want to sit and look at it while the night-time ants bite me. I love you. 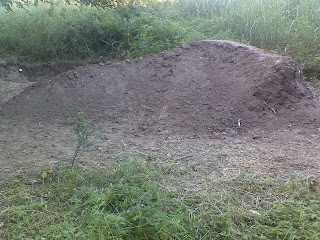 "DEERLAND"n- The name of the trails brian and I abandoned. They are up north and are actually pretty fun but they were started by a mountain biker named CJ. They are too far away and there are tons of rocks in the dirt. Pluses to deerland is a hut, a lot of deer, a decent tree house and a really low key location. oh yeah and a purse some weird kids found that has KY jelly in it...kinky.
"PABLO"n- We all know who pablo is...come on.